Your home for Zimbabwean marimba music in Tacoma! 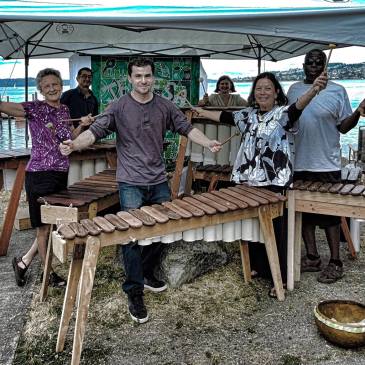 Jekesa Marimba
Tacoma’s own marimba band, Jekesa Marimba began as a trio with members hailing from the US, Japan, and Zimbabwe. In this form, Jekesa played throughout the Tacoma-Seattle area. The group gradually grew into a 7-person ensemble, with 6 marimbas plus hosho (shakers). The band’s repertoire reflects the diverse origins of its members, including a range of contemporary and traditional songs. The name “Jekesa” is ChiShona for “light-bringer”, and can be formed using syllables from the original band members’ names. Jekesa performs locally and out-of-state for various events, including the annual Zimbabwean music festival in Washington and Oregon.
Check out our Facebook page for more info, including photos, videos and upcoming events!

While technically not based out of Jekesa Studio, Ande Marimba has been director Jeff Brahe’s main music project for over 17 years! Recognized as one of North America’s premier marimba bands, Ande Marimba’s lineup includes community leaders from across the country. Like the Avengers, Ande’s members assemble in times of need, and almost always pull off something extraordinary. Whether it’s performing out on the street or at first-class venues, touring to festivals nationwide, or recording in Hawaii, the Ande Marimba Band is up for the task.